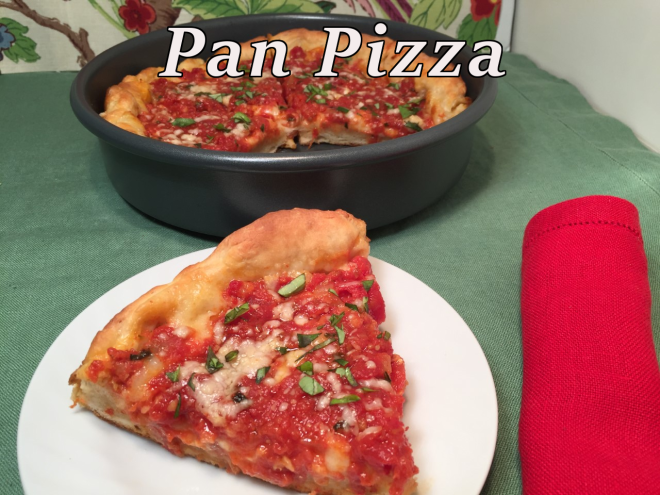 It occurred to me that while I make pizza quite often, I’ve never written a blog about it. So I decided to start with one that’s easy to make and is actually one of my favorites: PAN PIZZA.

This recipe calls for mixing in a food processor, but you could use a heavy-duty mixer, such as a Kitchen Aid, or even knead by hand – although I have no idea how long that would take. And don’t worry – there’s no tossing the dough involved!

Plan 3 hours start to finish – most of that time is hands off.

Note:  You’ll see some measurements are underlined.  This is to indicate it’s a portion of the total amount called for.

Melt 3 T butter. Also, set out 3 T butter to soften – cut it up to speed up the process. Set this aside for later.

Into the food processor put flour, 1½ tsp salt, 2 tsp sugar, and yeast. Pulse a few times to mix.  Pour the 3 T melted butter into flour mixture and turn on machine. Then slowly add the water through the pour tube. Let processor run until the dough clumps together – about 45 seconds or so.

Put 1/2 tsp oil in a bowl and coat bottom and sides. Smash dough ball into bowl, then flip it and smash down again (this will coat both sides). 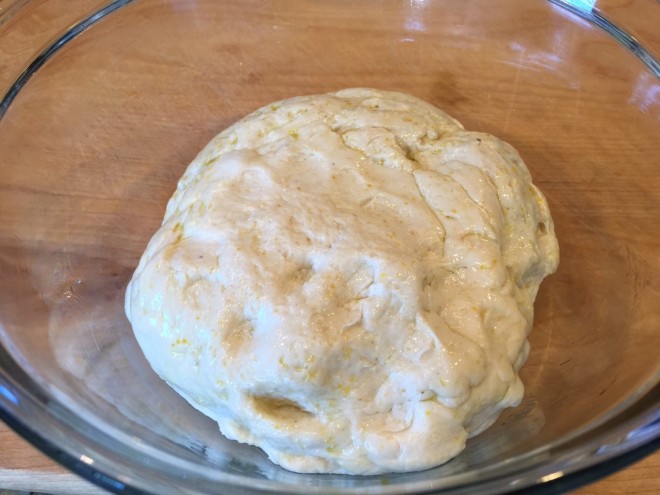 Cover with a plate and let rest about 30 minutes.

While dough is rising, prepare the marinara. Into a saucepan melt 2 T butter. Add in the onions, oregano, and remaining 1/2 tsp salt. Cook over medium heat for a few minutes, until onions are golden. Add in garlic and cook 30 seconds more. 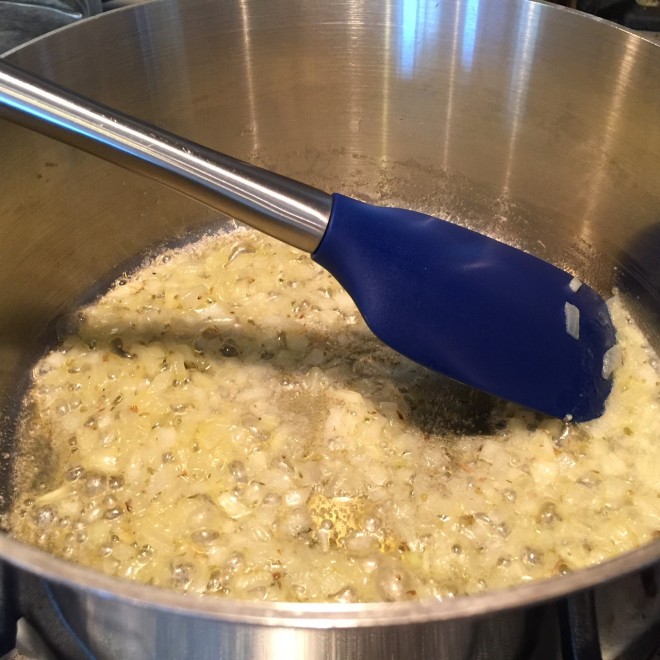 Stir in the tomatoes and remaining 1/4 tsp sugar. Bring to simmer and cook uncovered over medium/low flame 25 minutes. 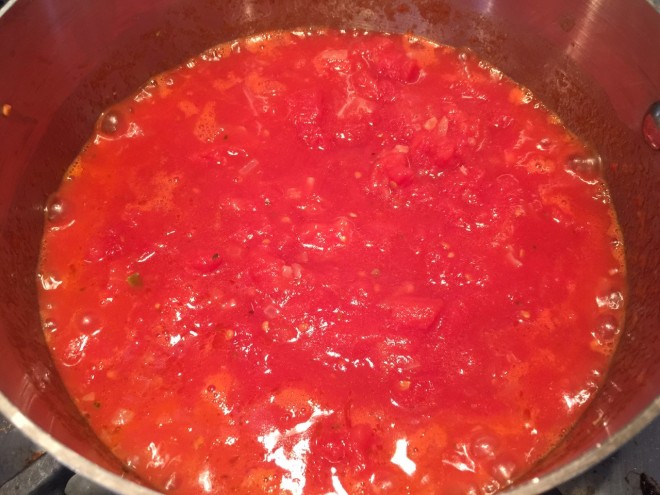 The sauce will be thickened. Remove from heat. Stir in 2 T basil and 1 T olive oil. Set aside. 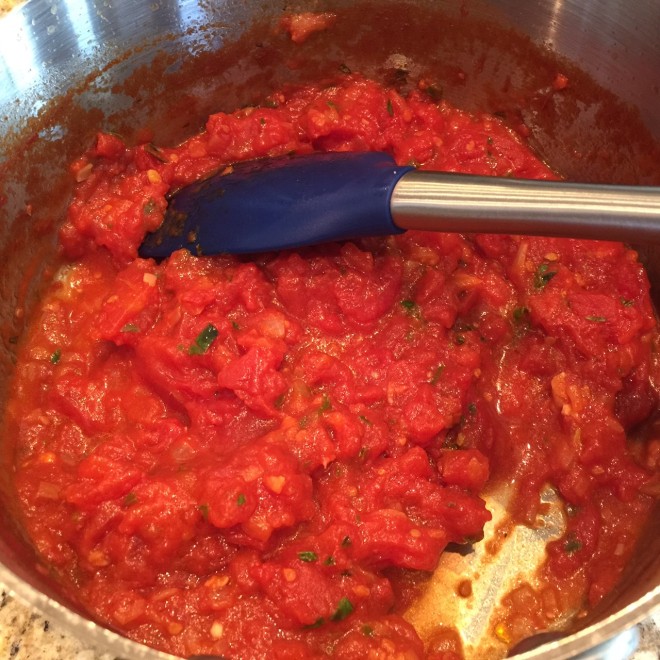 When the dough has risen for 30 minutes, roll it out on a NON-floured surface to a rectangle 15″ x 12″. Spread on the softened butter that you set aside earlier over dough to 1/2″ from edges. 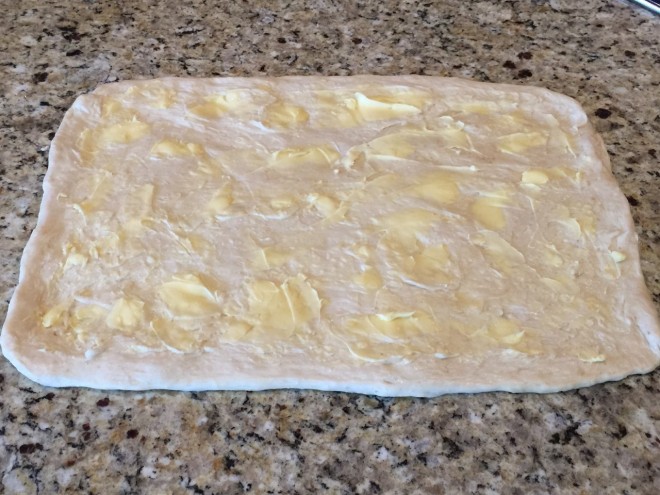 Starting at one of the short sides, roll up all the way into a cylinder. 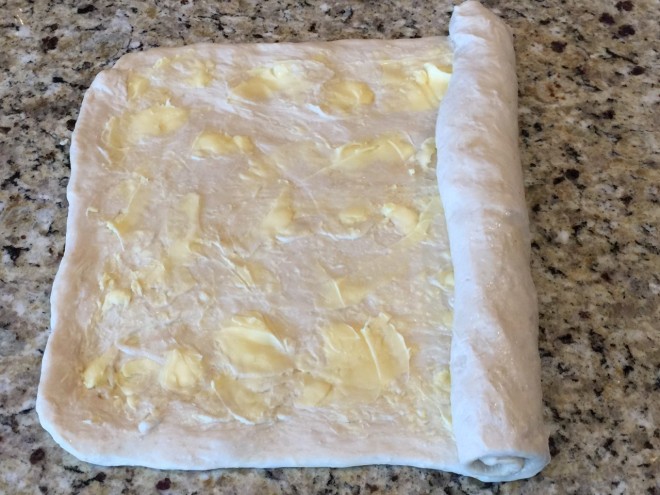 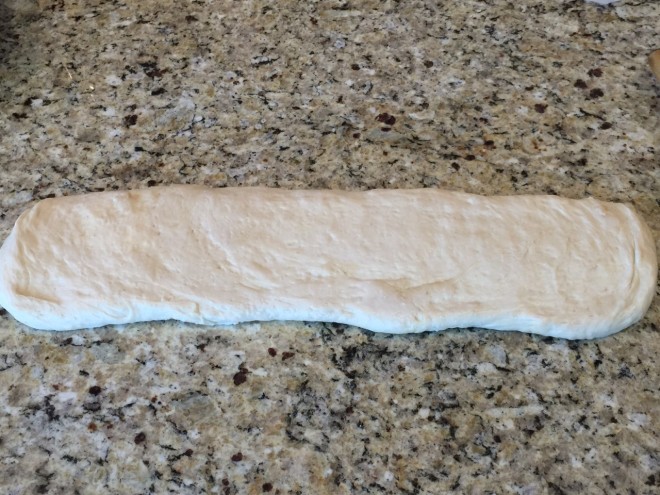 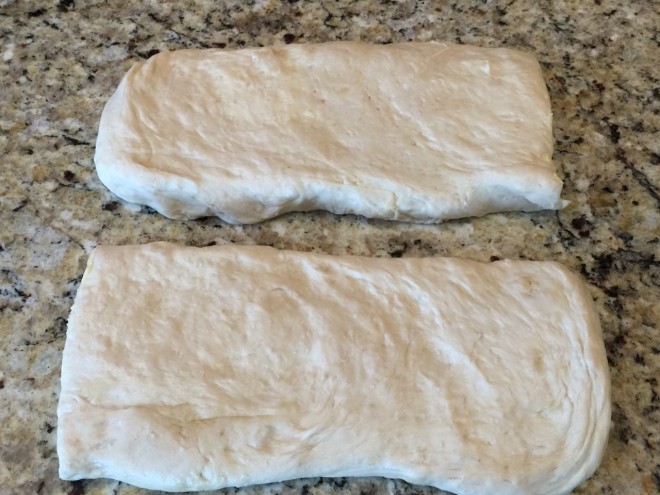 Fold each piece in on itself in thirds – like a business letter, pinching ends to seal. 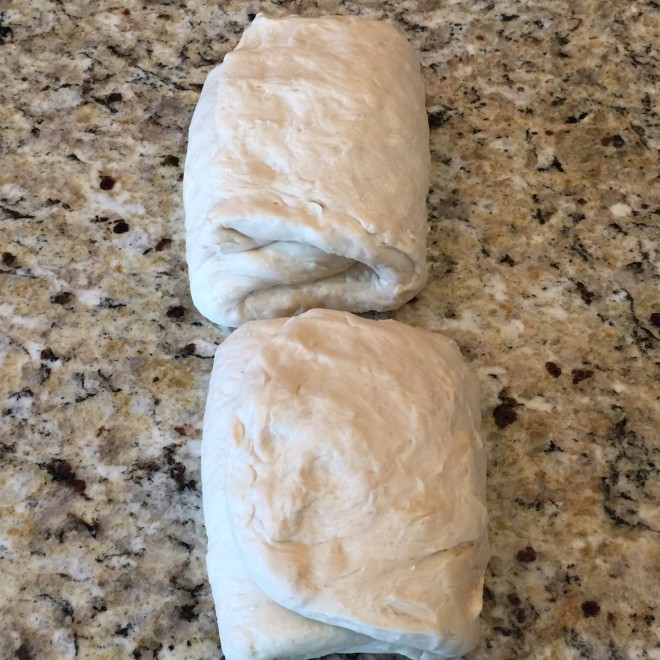 Spread 1/2 tsp oil in bowl and place in the 2 dough balls. Cover with plate and place in refrigerator for 45 minutes.

Preheat oven to 425º Fahrenheit. Place rack about 2″ from bottom of oven.

Pour 2 T olive oil into each of 2  9″ cake pans (don’t use the kind where the bottom is separate, such as a springform – the oil will leak out). On NON floured surface, roll each dough ball into 13″ circles . Carefully, place each piece into a cake pan, pressing dough into corners and up the sides about 1″. Divide the mozzarella, sprinkling half onto each crust. Spread half the marinara over each pizza on top of cheese. Sprinkle with 2 T Parmesan each. 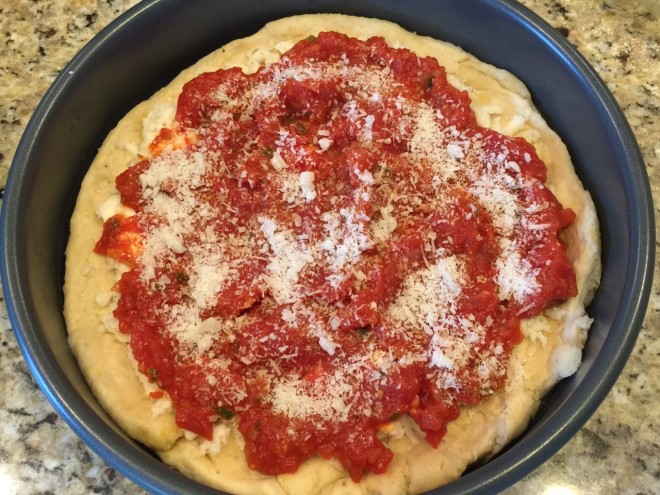 Place in oven and bake 20-30 minutes (rotating halfway through), until crust is well-browned. 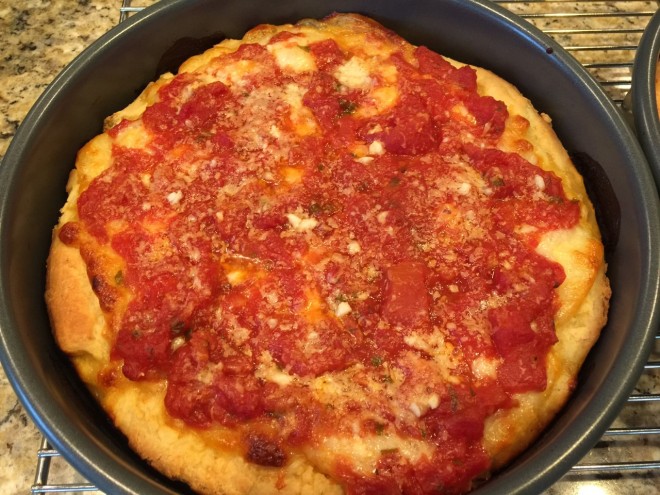 Sprinkle on remaining 2 T basil and let set in pan a couple of minutes, then remove to cutting board. Slice and serve immediately.