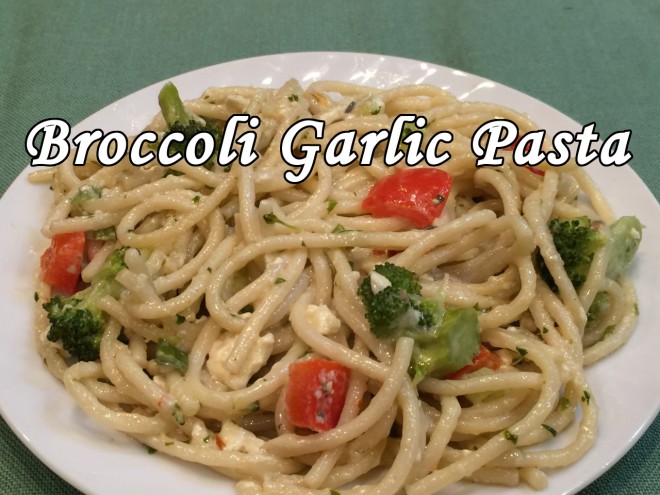 Broccoli Garlic Pasta is a new addition to my list of favorite dinners. It’s one of those recipes that I create in order to use up an ingredient that would soon be going bad – in this case, it was mushrooms. I threw in other items I had on hand – the pièce de résistance being the Feta cheese, which made all the difference.

Note: If you make your own pasta (which I do), use a 1 cup flour recipe – more than that is too much pasta for the sauce in this recipe.

BROCCOLI GARLIC PASTA – makes about 6 cups or so

In a large pot, cook the pasta until almost done (al dente) – you want it undercooked so it can absorb the sauce. Drain.

Into the now empty pot, heat the butter and oil. Add in the broccoli, garlic, red pepper, mushrooms, scallions, and red pepper flakes. Over medium/high flame, sauté veggies for 1-2 minutes. 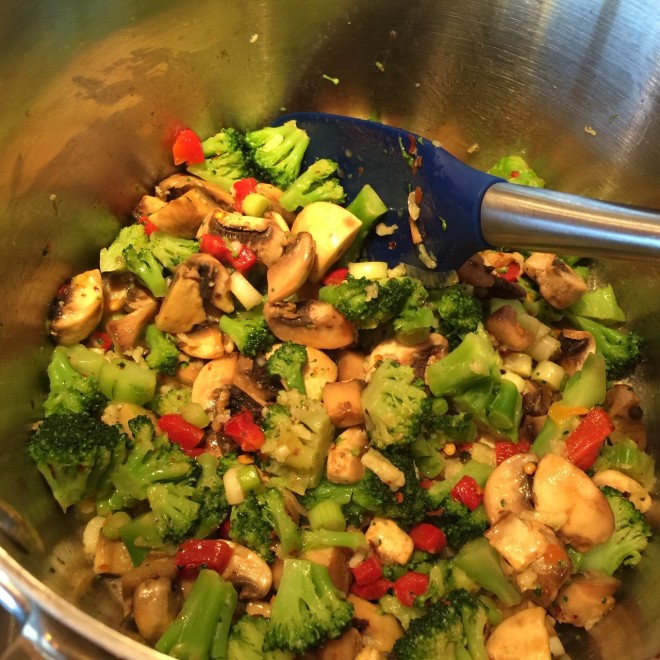 Kill heat and sprinkle on flour. Over low flame, stir 1-2 minutes to slightly thicken the liquid and cook-off the flour taste. 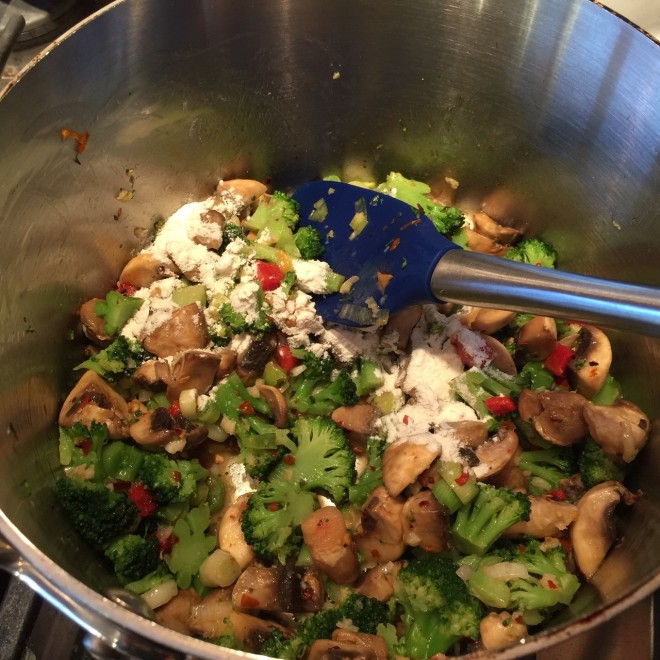 Add in the wine and cream. Cook over medium heat about 1 minute.

Stir in the Feta, Pecorino, and parsley. Stir in the pasta and heat through. Pour into serving bowl (or let remain in pot), cover, and let set for about 5 minutes to allow pasta to absorb the liquid and thicken up.

Due to my frugal nature (some may say, ‘cheap’), I found myself with an abundance of frozen egg whites. It turns out there are many more recipes that call for an extra egg yoke than an extra egg white. Due to my aforementioned frugal nature, I froze the unused whites rather than throw out perfectly good food.

I’d always scoffed at the humble angel food cake – it just seemed so blah. However, I had an America’s Test Kitchen recipe that called for 12 egg whites in their angel food cake. This would make a significant dent in my frozen egg white stockpile, so I made it.

I was stunned at how good it was.  A bonus being there are a lot less calories in an angel food cake compared to an equal sized slice of an iced butter cake.

Note: Ideally, you should use an angel food cake pan because it’s tubular, thus providing more surface area for the batter to climb and attach to. Also, it has little legs to allow air to flow underneath as the cake cools. (Angel food cakes are cooled upside down so they don’t collapse.) Use a bundt pan, if you don’t have the proper pan and elevate it.

Make a liner for the cake pan bottom by placing the pan on parchment paper open side up. Run a pencil around the outside of the pan bottom and cut out the circle. Flip the pan so the bottom of the pan is up, and place the cut-out circle on top. Firmly hold the parchment in place and trace the center tube outline with a pencil. Cut out and discard this inner circle. Very lightly grease the BOTTOM ONLY of the cake pan. (Don’t grease the sides – the batter needs to be able to grip it in order to rise.) Line the bottom of the cake pan with the parchment and press it down. The parchment will help the cake release. 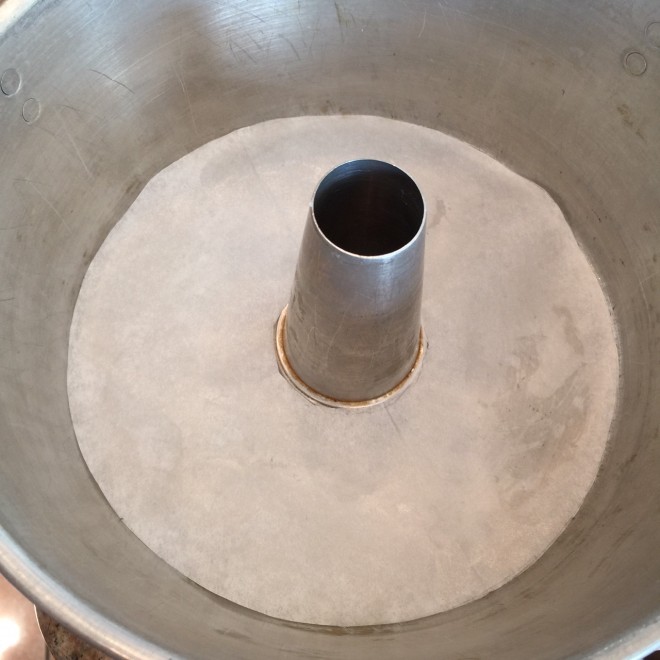 Into another bowl mix together the remaining 5 oz (3/4 cup) sugar, the cream of tartar, and the salt. Set aside.

Into a small bowl, mix together the vanilla, lemon juice, and almond extract. Set aside.

Pour the egg whites into the large bowl of your standing electric mixer. Beat on medium. Large bubbles will form at first, then they’ll decrease in size after about a minute.

With the mixer still running on medium, start adding the sugar/cream of tartar mixture to the whites 1 tablespoon at a time. 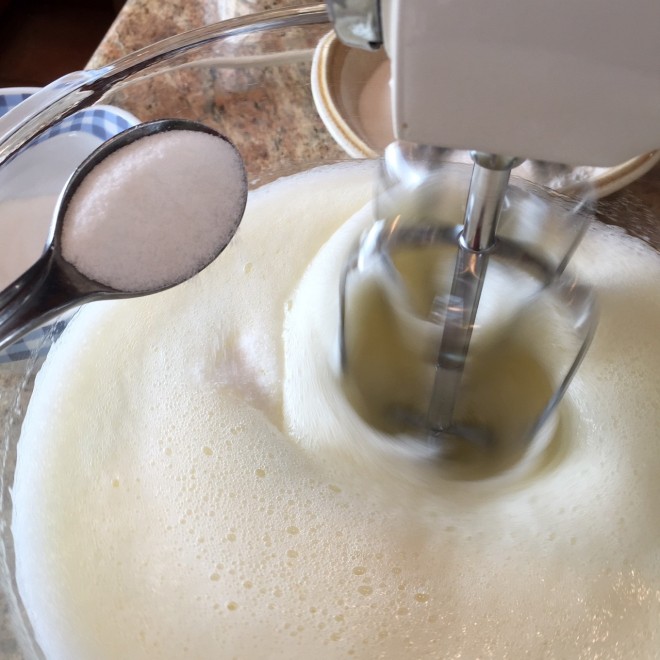 Once all the sugar/tartar has been added, increase mixer speed to high until soft peaks form. Turn off machine, pour in the vanilla mixture, then quickly mix together on low.

Here’s where your jaw may drop. If you read other angel food cake recipes, they’ll tell you to FOLD in the flour mixture gently in order not to deflate the meringue. I’m here to tell you that you don’t have to bother. Simply add 3 T of the flour mix to the batter through a sieve, then turn your mixer on the lowest speed for a few seconds to incorporate the flour, running a spatula along the sides and bottom of the bowl.

Turn off the mixer, then add another 3 T flour to the batter, turn on the machine to low and mix to incorporate for a few seconds. Continue until all the flour is added and incorporated.

Once all the flour is incorporated, gently pour batter into the cake pan, smoothing top. Rap pan a couple of times on the counter to dislodge any air bubbles (I’m not sure if this is a myth, but it can’t hurt.) 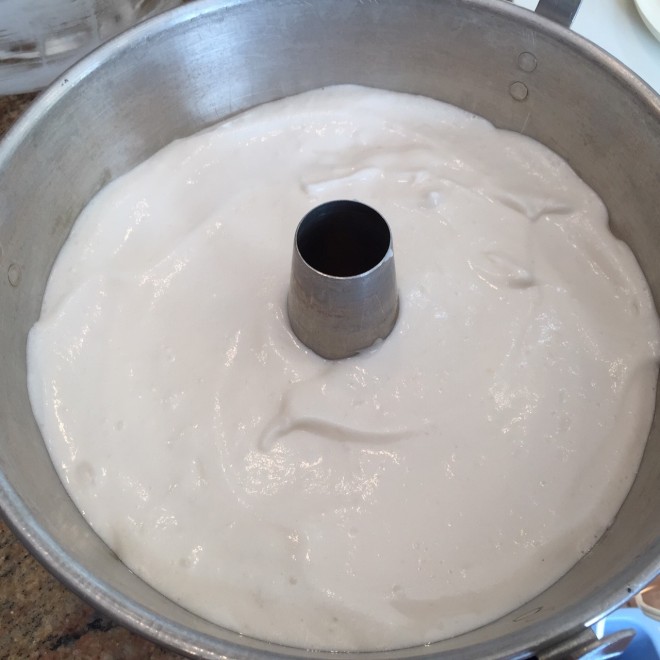 Put into the oven and bake about 45-50 minutes – until golden brown and cake springs back when you press it with your finger.

Remove from oven and immediately turn upside-down. Let cake remain like this until completely cooled – about 3 hours.

When cool, run a dull knife around the sides of the cake (including the tube), making sure you get all the way to the bottom. Flip the cake onto a plate – hopefully, the cake will fall out. (If not, run the knife around again.) Carefully, remove the parchment and let cake sit to completely cool before serving.