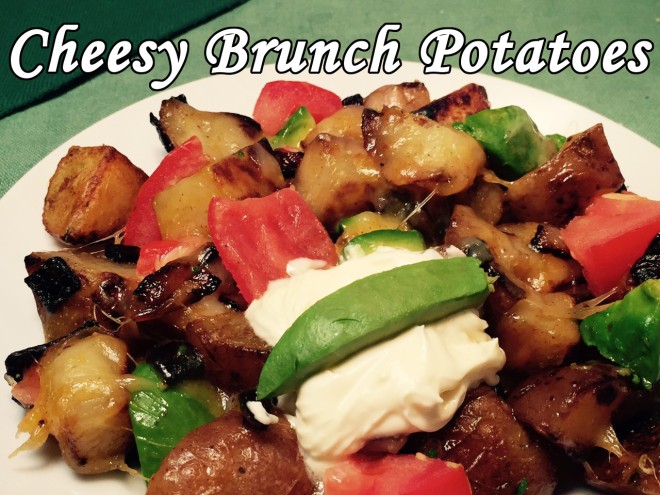 I’m a fan of potatoes – dressed up or dressed down, they’re pretty much always good. I’m, also, a fan of brunch….only for dinner. So CHEESY BRUNCH POTATOES is an Antonini family favorite evening meal.

Served with a vegetable, salad, and a yogurt shake, you’ve got yourself a fast, filling, and kid-friendly meal.

Get a pot of salted water boiling. Cut unpeeled potatoes into 3/4″ cubes. 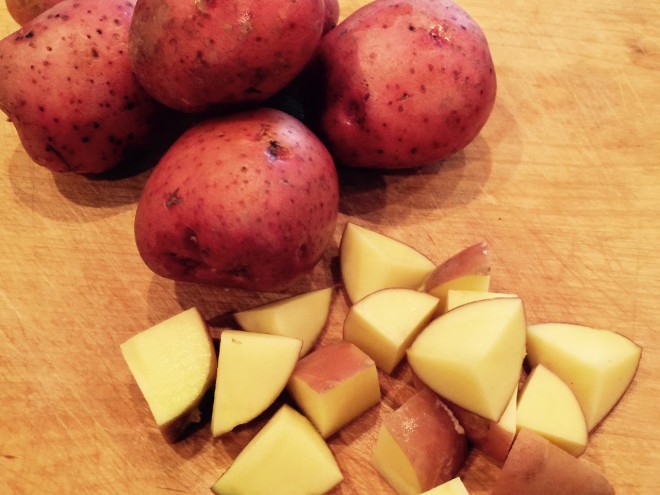 When water reaches boil, drop in potatoes and cook about 5 minutes – just to par-cook them.

(You don’t want them completely cooked or they’ll start to mash when fried.) Pour into sieve to drain.

In a large nonstick skillet (at least 12″), melt butter over medium-high heat. Add potatoes, flipping them with non-metal spatula every few minutes. After about 5 minutes add in the onions (they cook faster than the potatoes – you don’t want to burn them).

Continue flipping until the potatoes are browned. 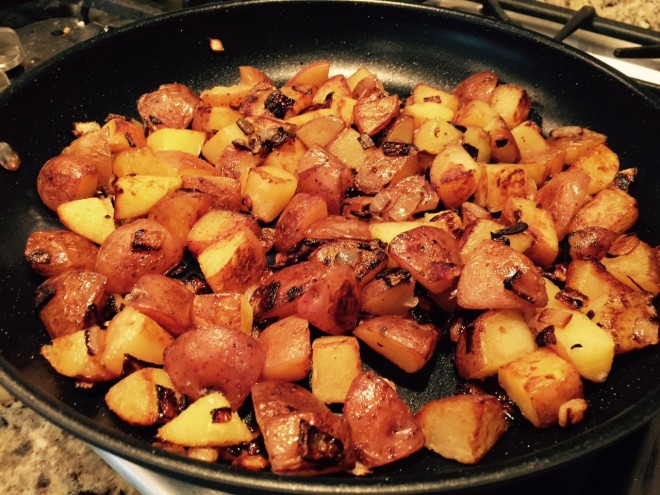 Stir in salt and cheeses to blend. Gently fold in tomatoes and avocado. Add salt and pepper, if desired.

In my ongoing attempt to post bathing-suit friendly recipes, I decided to turn to RED LENTIL SOUP. Enjoy it either as a meal unto itself, or as a starter to curb your appetite before the higher-caloric main course.

We often think of homemade soups as time consuming so, instead, we reach for the can opener. While it’s true that some soups can take hours to steep, this RED LENTIL SOUP is NOT one of them. It can be in your bowl in 30 minutes with very little bother.

NOTE: This soup needs to be seasoned well or it’ll just taste bland. Don’t be afraid of using salt – salt usage in the home kitchen isn’t a problem like it is with fast food or prepared foods.

ADDITIONAL NOTE: If you have garam masala (a spice blend) in your pantry and want to substitute it instead of the ginger, cayenne, cinnamon, coriander, & cumin, then use 2 tsp.

Add in pepper, ginger, cayenne, cinnamon, coriander, and cumin (or the garam masala). Return to heat for 2 minutes to bloom flavors. Stir in tomato paste and garlic, and cook 1 more minute.

Pour in vegetable stock, water, and lentils. Bring to boil then simmer uncovered about 15 minutes – until lentils are soft. Whisk soup vigorously 30 seconds to cream the lentils (don’t use blender or food processor).

Tired of the same old salad?  Try Fattoush Salad. It’s quick to put together (unless you’re compulsive, like me, and make your own pita bread).  Comprised of arugula, cucumber, mint, and cilantro, it’s a light salad that cleanses the palate.

Separate top and bottom of pitas. Cut each piece in half. Brush rough side of pitas well with olive oil. Place on cookie sheet, oiled side up, and bake 10-14 minutes, until crisp. Let cool.

While pitas are baking, wash and chop veggies. Place tomatoes, cucumber, and arugula in a bowl. Set aside.

In a small bowl, mix together lemon juice, salt, and garlic. Set aside.

When pitas are cool break them into bite-sized pieces. Set aside until ready to serve.

Previously, I posted an Eggplant Parmesan recipe made in the traditional manner:  coated fried eggplant, slathered with marinara sauce, and topped with mozzarella. This was baked to fully cook the eggplant and melt the cheese. What I ended up with was mushy eggplant, soggy crust, bland marinara, and rubbery mozzarella. I knew no different.

Until I watched an America’s Test Kitchen episode where they made Chicken Parmesan. Significant changes were made, thus producing a crispy crust, fresh-tasting marinara, and melty cheese. Of course, I substituted eggplant for the chicken.

What changes, you ask? They used panko crumbs in lieu of bread crumbs for a crunchy coat. They cut the mozzarella with Italian Fontina to achieve a nice melt without being rubbery.  They added the marinara sauce at the end to retain the fresh tomato taste and crispy crust. And, finally, they didn’t bake the heck out of it – in fact, they merely broiled it enough to melt the cheese. Brilliant!!!

NOTE:  A Queen Of Freeze time-saving tip is to double or triple the marinara recipe. Then freeze it in portions for future use. Don’t add the basil before freezing, though – it will lose it’s potency.

Remove ends of unpeeled eggplants and discard. Cut into 3/4″ pieces. Lay rounds on a wire rack and sprinkle 1/8 tsp of kosher salt on each side of slices. Set aside for 20 minutes to allow the salt to draw out water from the eggplant.

Prepare the marinara:  In a saucepan, heat 1 T olive oil. Add in the garlic, 1/4 tsp table salt, 1/4 tsp oregano, and red pepper flakes. Cook for about 30 seconds to bloom. Add the canned tomatoes and sugar. Bring to simmer and cook 20 minutes, uncovered. Stir now and then. After 20 minutes, remove from heat and stir in the basil and remaining 1 T olive oil. Set aside. 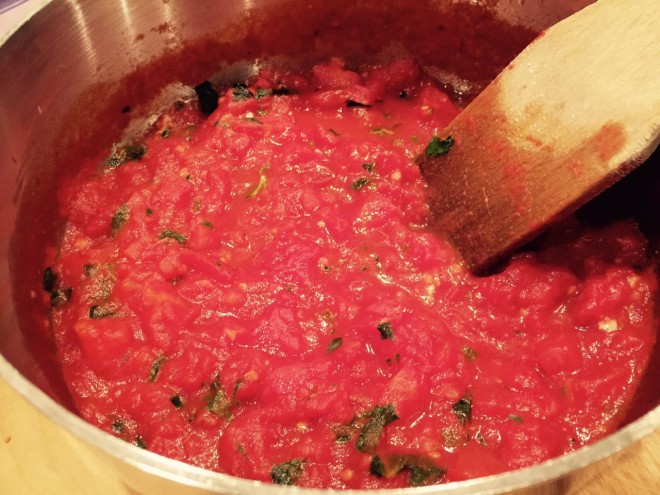 In a bowl, mix together panko, Parmesan, garlic powder, 1/4 tsp oregano, and pepper. Pour onto a large plate.

Using a spoon, mix together the flour and egg, smashing out the flour lumps as best you can. Pour onto a large plate.

Wipe down both sides of eggplant slices with paper towel to remove excess salt. Heat several tablespoons of vegetable oil in a large skillet over medium/high heat. Dredge eggplant slices first into egg (both sides),

and then into panko mix (both sides) 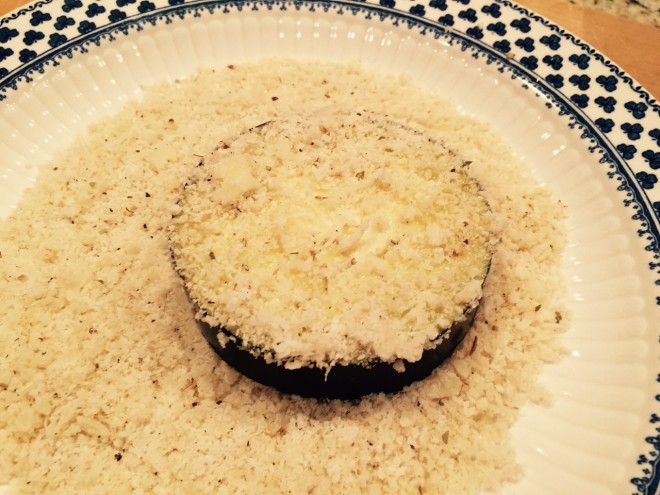 Place into skillet, frying both sides to golden brown.

Place eggplant on a broiler pan and preheat broiler with rack in upper third of oven.

Combine Fontina and mozzarella. Sprinkle cheese on eggplant. Broil about 3 minutes, until cheese is melted.

To serve, top with marinara. Sprinkle on additional basil, if desired.