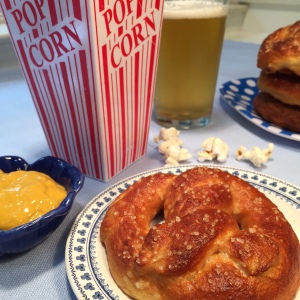 Who doesn’t love the aroma of freshly baked bread? Even a full stomach will start growling at that intoxicating smell.

So when we’re at the mall it’s hard to resist those soft hot pretzels. If you’re only buying 1 or 2, it’s not such a big deal. But if you’ve got your whole family – look out! You’re talking real money! And if teenaged boys are involved is this group…holy moly! My sons can down a pretzel before I’ve had my first bite, and are ready for more.

I decided to try my hand at making them. All the recipes I found were pretty much the same. Most used all-purpose flour, but one called for bread flour. I wanted a pretzel that had some stretch when I broke it apart. Since bread flour has more protein which causes the stretch (please, don’t ask me the science behind this), it surprised me all-purpose flour was used so often.

I donned my lab coat (complete with goggles – just for the effect) to make a batch with all-purpose and a batch with bread flour.

I also noticed that nearly every recipe had you boiling the formed dough in baking soda and water for 1 minute before baking them. Was this really necessary, I wondered? (I’m not averse to cutting corners when I can!) So while I was in my experimental mode with the flour, I decided to test boiling versus non-boiling.

As a good scientist, I did my tests twice. The results were conclusive – bread flour was best as far as taste and stretch, while the all-purpose pretzels looked prettier and rose a bit more. But I’m a person who cares about the beer, not the bottle, so I’ll be using bread flour.

I’m sorry to report to you lazy cooks, there was actually a big difference with the water bath – whether they were made with bread flour or all-purpose, the unboiled were dryer, had no stretch, and weren’t as pretty, as you can see in the photo below:

Put 2 cups of the flour, the butter, salt, and sugar into the work bowl of your food processor. When yeast is proofed, turn on machine and slowly add the water through the pour spout. Keep adding flour a few tablespoons at a time until the dough forms a ball. I use nearly all of the 3 cups of flour. If you don’t own a food processor, you’ll have to do this step by hand, kneading about 10 minutes.

Empty dough onto a floured board. Pick up from the bottom and fold in on itself, so the floured side surrounds the ball. Plop into an oiled bowl, then flip the ball and plop back upside down – now the ball is oiled on both sides. Cover with a tea towel and let rise for 1 hour.

In a large NON-ALUMINUM skillet, bring the baking soda and 10 cups of water to a full boil. If you don’t own a large skillet, use a smaller one and cut back on the water and baking soda.

Prepare wash by mixing cornstarch with 1/4 cup water in a small saucepan. Stir constantly while bringing to boil. Remove from heat.

Carefully drop as many pretzels in boiling water as will fit. Boil 1 minute, flipping after 30 seconds. Remove to well oiled cookie sheet.

When they’re all boiled, brush on cornstarch wash. Sprinkle with coarse pretzel or sea salt. Bake at 450º Fahrenheit for 12 minutes. They’ll brown much earlier than the 12 minutes, but don’t remove from oven – they’re still not done. Transfer to wire rack.

Eat immediately for optimum taste. FYI – these pretzels are only 60 calories each! So live a little – have 2….homemade pretzels are cheap!!!