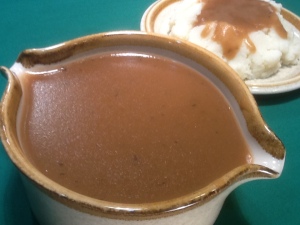 My husband and I have always had this unspoken agreement regarding the distribution of household duties. For example: I do the weeding and pruning, he mows the lawn. I make the home repairs, but when it’s something I can’t do, he calls the service people and deals with them. I do all the cooking, but he handles the barbecue. It’s a system that’s evolved over the course of our marriage, and works for us.

But here’s the kicker: Even though I plan, shop, and prepare the massive amount of holiday dishes, my husband is hailed with accolades for his one contribution:  gravy. Apparently, gravy is THAT important to my family.

So this year, I’m fighting fire with fire. Sharing the table with hubby’s giblet gravy will be Bonnie’s Savory Mushroom Gravy, which is my tweaked version from The Taste For Living Cookbook. Onion, shiitake mushrooms, and soy sauce form the base. Throw in a little sage and thyme for flavor. Then thicken with rice flour. You now have yourself a creamy, savory brown gravy with no fat! Add to this the fact that it’s the easiest gravy EVER, and this recipe will be on your table every time you serve mashed potatoes…or rice…or vegetables. (Can you see where I’m going with this?)

Bonus:  Mushroom Gravy freezes well. Take it from the self-proclaimed Queen of Freeze (that would be me), if you like this recipe – double or even triple it next time, and freeze in portion sized containers.

Heat oil in a saucepan over low flame. Add in onion, mushrooms, thyme, and sage. Cover and cook for about 10 minutes, stirring often. Towards the end of the 10 minutes the mushrooms will have exuded moisture and the onions will have separated.

Mix in water and soy sauce. Cover and cook 10 minutes.

Sprinkle in rice flour, using a whisk or fork to blend.  Don’t worry too much about lumps since they’ll be strained out. Bring to boil, then lower flame to simmer gravy for 10 minutes uncovered, stirring often.

Pour through a sieve and either serve immediately or save for later. Can be made a few days in advance.

3 thoughts on “Savory Mushroom Gravy – Vegetarians Give Thanks!”