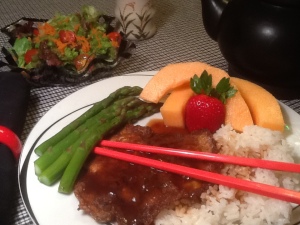 It isn’t always easy being a vegetarian. Before I changed my carnivorous ways, I had my go-to picks when I went for Chinese food:  won-ton soup, sweet and sour pork, egg rolls, and chicken chow mein.  When I became a vegetarian I found myself carefully examining the menus for meatless choices.  Back in those days I was pretty much limited to stir fried vegetables and rice. This was long before the days when Chinese restaurants started adding tofu – or even removing the meat – from selections on their menus.

I finally spied ‘Egg Foo Yong’ (sometimes spelled ‘yung’ or ‘young’) on the menu and gave it a try.  Mmmmm!  Fortunately, my first sample of egg foo yong was delicious. Since then, I’ve discovered it really depends on the restaurant and the chef.

Egg Foo Yong seemed like a dish I could make at home – I’m always looking for vegetarian recipes AND ways to save money.  Not only can eating out be costly, but I tend to worry if the food preparers are using sanitary precautions.  I admit it – I’m a smidge frugal (okay – I’m cheap) and paranoid.

For those of you who have never heard of Egg Foo Yong, it’s basically an egg pancake with bits of things like mushroom and bean sprouts mixed in, served over sticky rice, and topped with a brown sauce.  I’ll give you the recipe the way I make it, but there’s a lot of room for personalizing. Because these egg patties cook quickly and are best served immediately, I make the brown sauce first, then the sticky rice (and while it’s cooking I get the side dishes going), then I begin the egg pancakes.

The more you can fit on your skillet or griddle the better so the first ones don’t have to sit around too long.  But – word to the wise – don’t crowd them. You’re going to have to flip these babies and, unless you’re a whiz with a spatula, they rarely land where they started. You want to avoid flipping them onto another one.

NOTE:  I use a 13″ All Clad skillet to cook the egg patties and have found that making 3 at a time is the best number.  Perhaps in future, I’ll use my griddle, as well.  That way, I can squeeze in a few more per cooking batch.

In a small saucepan put the cornstarch, sugar, vinegar, and soy sauce.  Stir and mash until you have smooth paste – no lumps. Add in the water and heat over a medium flame until the color changes from coffee-with-cream color to black coffee color, stirring often. At this point the sauce will thicken a bit.  The color and thickness change will occur just before the boiling point.  Once the sauce begins to boil, turn off the heat.

NOTE:  You don’t have to restrict yourself to onions, mushrooms, and bean sprouts (or even use them at all).  You might try carrots, peas, scallions – whatever you fancy!

In a large skillet heat the sesame oil a bit, then sautè the onions and mushrooms for a few minutes.  Pour the cooked onions and mushrooms into a bowl and set aside to cool. You’re going to be adding these to the beaten eggs – if they’re hot, they’ll start cooking the eggs.

In a medium bowl beat the eggs and soy sauce.  Stir in the bean sprouts and cooled onions and mushrooms.

In the large skillet you used earlier pour in enough canola oil to cover the bottom.  Ladle on the egg mixture like you were making pancakes.  You don’t want to use too much per patty – maybe 1/3 cup.  They spread rapidly and then kind of keep spreading. Try not to have them touch – you don’t want to have to cut them if you can avoid it.  Flip them when they’re well browned on bottom.  Once they’re well browned on both sides transfer to a platter.  Add more canola oil as necessary as you cook the remainder.

Serve them hot over sticky rice, generously pouring the brown sauce on top.