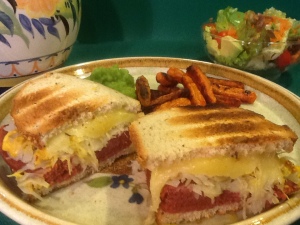 My mouth still waters at the memory of the mile high corned beef sandwiches my parents would buy from our favorite deli when I was a kid.  My poor mother had to brave the disapproving glare from the server because I insisted on ordering mine on white bread. Somewhere in my late teens, I finally made the transfer to rye.  Everyone breathed a sigh of relief.

The victory was short lived, however, because I became a vegetarian soon thereafter.  Ah, well!  It was nice while it lasted.  Goodbye corned beef, hello….corn.

But, never fear.  This story has a happy ending.  Over the last several years, more and better tasting imitation meats have hit the markets.  Including corned ‘beef’.  (When I use quotes around a meat, I’m talking about faux – aka, fake – meats).  I’ve mentioned before, and will continue to do so – there are all kinds of imitation products out there.  Some inedible, some excellent.  And taste is subjective – what I like, you may hate.  So experiment with the various products and decide for yourself.  Experimenting is important in vegetarian cooking.

The thing about most fake meats is they work best when they’re the base for other ingredients (such spaghetti sauce, or a casserole).  On their own….well, no meat-lover will be satisfied.  So boiled corned beef, cabbage, and potatoes is out of the question.  But a toasted corned ‘beef’ on rye with melted Swiss, sauerkraut, and mustard….now you’re talking!  The marriage between the corned beef essence of the fake stuff, and the flavors of the rye, sauerkraut, Swiss, and mustard are enough to pull off this sandwich.  Now, I’m not gonna lie – it’s not exactly the same as the real thing.  But, for me, it’s enough to talk me off the ledge when I’m tempted to sneak the real thing. Add to that some Mushy Peas (see post: Mushy Peas:  A Super-Food Disguised As A Side Dish), roasted carrots , and a green salad, and my Irish half is quite content.

Drain the sauerkraut in a sieve.  Fold several slices of fake corned ‘beef’ in half and lay them on one slice of rye bread.  Lay Swiss cheese on another slice of rye.  Put them in the toaster oven (or big oven if you don’t have one) and toast on high setting (I used the highest setting).  Once toasted, pile the sauerkraut on the corned ‘beef’ half, squeeze on the mustard, then top with the cheese half.  And, VOILÀ – a vegetarian corned ‘beef’ sandwich.

One thought on “‘Tis No Blarney – Vegetarian Corned ‘Beef’”