Cornbread often doesn’t live up to expectations. While it may look buttery-moist with it’s vibrant yellow color, one bite sends you reaching for the water glass. The other side of the coin is the cornbread you get at some restaurants, so full of sugar and fat that’s it’s really just a slice of cake.

Here’s a recipe I got from America’s Test Kitchen that uses whole corn kernels pulsed in a food processor to release their juice, combined with the usual cornmeal to maximize corn flavor. Make it in a cast iron skillet to get that lovely golden brown crust.

NOTE:  A blender probably wouldn’t work for chopping the corn – the kernals might get stuck under the blades. You could try running the blender empty, then dropping in the corn. Or better yet, try using canned creamed corn. I’ve not actually done that, but would think it would work.

ADDITIONAL NOTE: A cast iron skillet is best for cornbread – it gives it that nice crust. If you don’t have one, make sure your skillet’s handle can take the high heat of the oven. (Then put a 10″ cast iron skillet on your birthday or holiday list!)

Preheat oven to 450º Fahrenheit.  Make sure you do this to get that nice crust!

In a large mixing bowl, stir together the cornmeal, flour, sugar, baking powder, baking soda, and salt. Set aside.

Melt the butter and set aside to cool a bit.

Into the workbowl of your food processor (If you don’t own one, put it on your birthday or holiday list, which is becoming longer by the minute!)), add the corn, sour cream, eggs, and hot sauce. Pulse about 6 times to break up corn.

Pour the corn mixture into the cornmeal mixture and gently stir a few times. (The dry mixture will buffer the eggs so they don’t cook when the hot butter is added.) Then add in the butter and complete blending the ingredients just to the point where the flour in incorporated. Don’t over mix – overmixing a quick bread (which this is) will produce a tough bread. 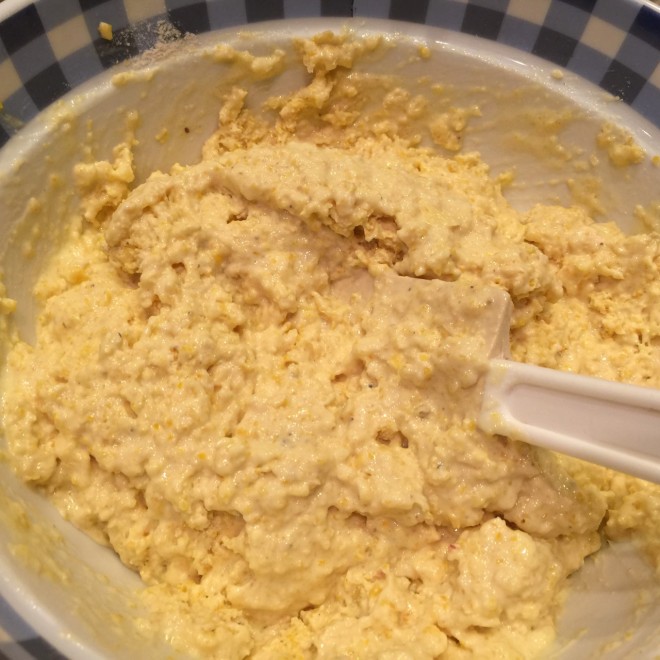 On the stovetop, heat the oil in a 10″ cast iron skillet over high heat until shimmering. Turn off heat and pour in batter (you’ll hear sizzling), spreading it out evenly and smoothing top. 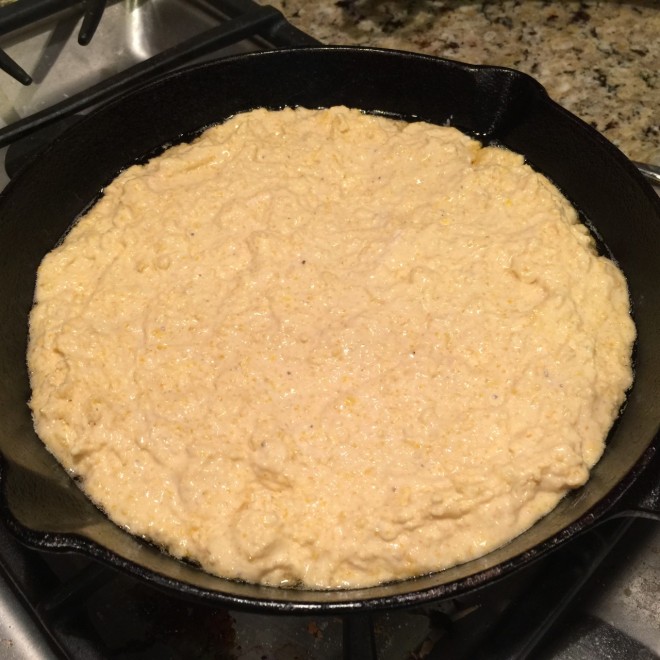 Place in hot oven and bake at 450º F for 18-25 minutes. (Set your timer for 18 minutes and test with a toothpick – when done, it should come out clean. Reset timer and cook longer, if need be.)

When done, remove from oven and let cornbread set in skillet at least 20 minutes before slicing.